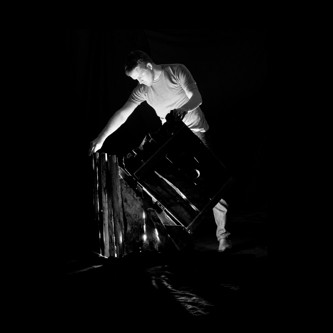 Back in May, Jonathan Lee (Anduin) collaborated with Dag Rosenqvist (Jasper, TX) on Bending of Light, an album that looked skywards and beyond for contrasts of brightness and dark. Abandoned in Sleep now turns very much inwards, where the shifts slide between dark and darker. It’s also a bit of a jigsaw, as Lee constructs the tracks from a variety of collaborations, samples and live performances by, and with, fellow sound scientists like Stefan Németh (Radian), John Twells (Xela) and Erik Skodvin (Svarte Greiner). The flicking of lighters, feet through leaves and a variety of skittering across surfaces advertise a physical presence wandering through these dream states. The musical instruments act almost as beacons, like the warning tone of oboe beneath “Autumn Looming,” the Morse code of plucked strings on “Octogonal Forms” and the foghorn of harmonica on “A Light in the Darkness.” All are draped with an enveloping tone of ennui that nicely embodies the distress of waking suddenly from a dream.

It wasn’t all that long ago that Jonathan Lee seemingly appeared out of nowhere to make a major impression with Forever Waiting, his debut outing under the Anduin name on his own SMTG label. Now the follow-up, Abandoned In Sleep, finds the promise of that debut realized in spades. Described by Lee as a product of “a year spent drifting on endless waves of sound in the moments before sleep,” the hour-long collection is very much in the dark ambient electronica style associated with Miasmah artists Svarte Greiner, Jasper TX, and Death Center. That dark ambient connection is all the more reinforced by a scan of the experimental innovators involved in the project: samples were provided by John Twells, Erik Skodvin, and Stephen Vitiello, among others, and studio and live collaborations with Stefan Nemeth, Skodvin, Vitiello, and Dag Rosenqvist (aka Jasper TX) appear too (the album’s closing piece, “Black River (Live),” is, in fact, a performance with Svarte Greiner that was previously issued in a seven-inch format).

One thing that separates the Anduin sound from his genre brethren is the tightly structured approach to composition and arranging that Lee brings to the hour-long album’s material. No note is out of place, and no sound is superfluous—everything counts, in other words, and everything belongs. In general terms, the Anduin sound is gloomy and murky, with the image that comes to mind one of a small boat drifting down a coal-black river leagues below the earth’s surface. Another thing that distinguishes the Anduin sound is the judicious control Lee brings to the sound palette, with a carefully-considered mix of instruments and sounds included in a particular piece. Consider, for example how greatly the bluesy wail of a harmonica adds to the arresting sound design of “Contents of a Black Box,” which is also distinguished by a groaning bass pulse and flickering electronic atmosphere. Echo-laden duplications of harmonica wheeze renders the later “A Light in the Darkness” equally memorable. The rippling soundscape “Labyrinthian Void” sucks the listener into a black hole of spacey reverb, swoops, and intergalactic rumble, while clanking noises and oppressive dungeon atmosphere earn “Our Future is a Debt” its dark ambient classification. The croak of a bass clarinet floating over a river-like swirl likewise lends “Into Abandon” a distinctive character. That Lee chose not to list the instruments involved in the material’s production is fitting; the tracks should be broached as complete mini-universes of electroacoustic design, rather than as jigsaw puzzle pieces constructed additively through an accumulation of distinct acoustic and digitally-produced sounds.

Coming on like a Deathprod-Mad Hatter merger is Khate, a one-woman conjurer hailing from Virginia who slathers her first vinyl outing, Pareidolia, with all manner of alien transmissions and other electronic oddities. In contrast to Anduin, Khate brings a looser approach to her handling of sound materials; tracks unfold in a somewhat free-form manner, almost as if the sounds themselves are dictating the shape a given piece will ultimately have. Waves of static, ripples, and clicks combine with percussive rumble and synth pulsations in eight ever-explorative set-pieces. In the creeping, sci-fi-styled evocation, “Additives,” swollen synthetic bass tones warble amidst the babble of alien organisms and rustling campfire crackle. “Love” adds a thrusting rhythm base to its windswept attack before morphing into an electro-tribal incantation. A clearly-defined beat pattern lends “Liquid” a forward-directed thrust, if one slowed slightly by a thick mass of bell tones, burble, and fuzz. “The Slender Man” isn’t just lean, but sickly and mildly convulsive too, judging by the thick brew that sizzles and pops throughout the woozy, seven-minute setting. The rather perversely-titled “Comforting the Meat” ensnares orchestral woodwind-and-strings samples and elastic beat patterning in a cavernous industrial churn. If Anduin’s a scientist operating in accordance with a clearly laid-out set of instructions, Khate’s an experimental alchemist spontaneously trying out different mixtures of found sounds, synths, percussive effects, conversation snippets, ambient textures, and electronics in order to discover the ways in which they might blend.