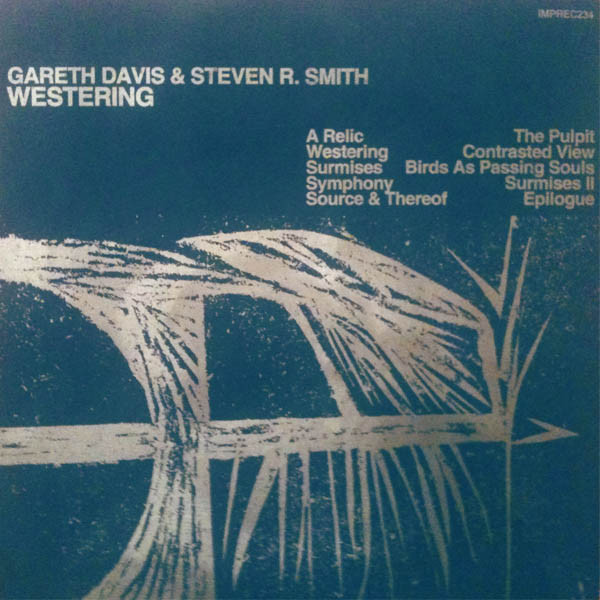 In May of 2008, Amsterdam-based clarinetist Gareth Davis and American guitarist Steven R. Smith convened at Worstward Studios, in Los Angeles to collaborate and create music together, the results of which have been titled Westering. Gareth Davis is a dedicated performer of contemporary music while at the same time works with improvising musicians such as Jon Balke and Terje Rypdal as well as electronic artists including Machinefabriek and Ryan Teague (Type Records) and has recently completed the Rabbit at the Airport series of LPs with Martin Stig Andersen and Robin Rimbaud (aka Scanner). Steven R. Smith has been releasing a steady stream of solo records for over the last decade as well as playing in various improvisational groups including Thuja, Hala Strana, and most recently Ulaan Khol. This fruitful collaboration has created the perfect meeting place between the scrapings and various layers of musical detritus Steven R. Smith has been known for and the textural, guttural and almost feedback laden bass clarinet of Gareth Davis to create a delicate and abstract musical language of shifting moods and textures.

Screen printed at Monoroid on heavy duty board stock.

Despite his membership in the Jewelled Antler combo Thuja and his past affiliation with space-rockers Mirza, multi-instrumentalist Stephen R. Smith isn’t much of a collaborator. Even when he records under an alias’ Ulaan Khol, Hala Strana, he does almost everything himself.

Even though Smith shares the bill on Westering, it feels very much like part of his solo oeuvre. Smith has such a distinctive fingerprint that mere seconds after the needle hits the plastic you know it’s him. Whether he’s etching stark, crumbling lines with his electric guitar, rasping drones and textures from a fiddle, or eerie swells from some pre-digital keyboard, the light thins and every surface glints with a dim patina of antiquity. He may live and record in Los Angeles using electrically powered equipment, but Smith’s music inexorably draws you into some time and place where coal dust begrimes your face when you walk down the street and an oil lamp flickers on the table once you step inside.

The woody tone and melancholy mood of Davis’ contributions fits right into this imagined environment. On the title track, bass clarinet, bowed violin and shuddering guitar, all well doused in reverb, trade lonesome cries that seem to warn the listener away from some long-sought destination. Reed cries flash like reflected lightning against black, billowing clouds of amp buzz and fuzztone chords on ‘Source & Thereof’. And on the two iterations of ‘Surmises’, Davis’ horn and some reedy keyboard blend so completely in their ivy-like twining over an Eno-esque electric piano figure that it’s hard to tell where one ends and the other begins.

If you’ve ever heard another of Smith’s records, you know this sound, and if you appreciate it already you’ll likely find this a worthy addition to your shelf of Smith. While Davis doesn’t really change Smith’s music, he does bring a rare virtuoso presence that contrasts markedly with Smiths evocative but decidedly non-flashy playing.