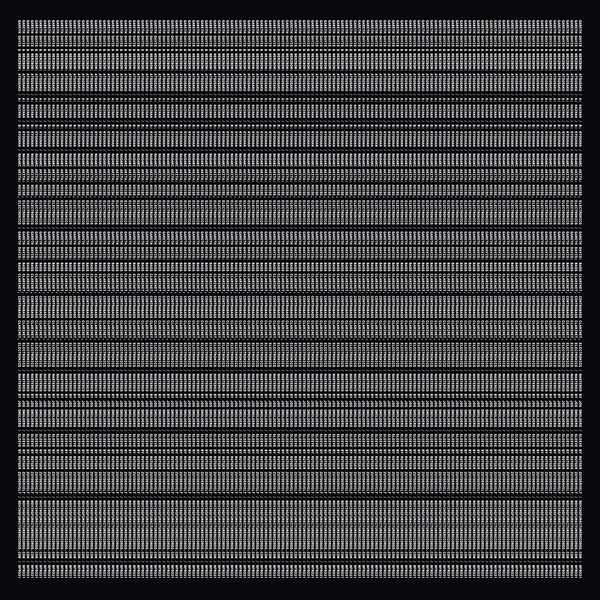 A massive wall of sound over two tracks that moves from the shifting low-end structures and the ricochet of howling reeds to the blistering haze of dense white noise and rapid-fire electronic tones.
The title Atsusaku, suggests pressure or mechanical compression and it was from this starting point, the idea of Davis’ reed sound being compressed and constrained by the saturation of Akita’s textures, that the album was born. The acoustic sound almost suffocated beneath the sweep of sonic overload, but through limitation and pushing the mechanics of the instrument itself, finding a space to cut through with layers of self-distorted screams.

Haihan, a furiously abusive maelstrom of coloured-noise, digital cross-fire and distorted bass clarinet is unrelenting as it searches for moments of pulse within the haze only to move abruptly back into the mechanical barrage of looping textures.
Kyouhan is is far more open in its texture, the low-end layers of reeds moving across the sound space as the squall of chirps and mechanical screeches build slowly into a dense mass of reverberated pointillist details.

Atsusaku, the collaboration of “king of noise” Merzbow and avant-bass clarinetist Gareth Davis, is 40 minutes of burning wind, crumbling static, squealing feedback, klaxons, and sirens. It’s like walking through a desolate manufacturing plant after hours.

Noise music may be the most “post-industrial” music extant. Not only does the sonic terror tend to approximate the sounds of machines glitching out and eating themselves, noise music also tends to be made using industrial bric-a-brac in raw, rundown factory spaces. As such, noise music could be interpreted as the sonic subconscious of industrial societies.

The organized sounds of Masami Akita are both depth psychology and industrial artifact. Rather than trying to be a concrete statement, as most music is, Merzbow’s music is more like some arcane device, left to run until it either devours itself or uses up all of its planet’s resources.

Atsusaku, which translates to ‘squeeze’ from Japanese, is a name for industrial air compressors. The two improvisational titans used this as a launching off point, with Merzbow ruining and ruminating on Gareth Davis’ hot blasts of air.

Album opener ‘Haihan’, which translates to ‘disobience’, is the more scathing of the two tracks on offer here. Merzbow takes greater liberties with Davis’ deep tonal dissonances, lacing them with grinding, pulsing, hissing, wubbing, and nearly any other sound that could be produced by crude, nameless technology. It offers much more commentary on post-industrial psychology, seemingly both railing against the machines that are chewing up our planet, as well as also including the malaise of those factory workers who used to operate those machines.

Side B, ‘Kyouhan’, punches this spectral machining complex full of holes. Merzbow conjures tiny silvered streams of rainwater using glitched-out tape rewind, while Akita’s beloved birds twitter in the margins of the stereo field in strange, eerie, uncanny half-life, courtesy of a particularly alien reverb. Davis’ bass clarinet blasts are left much rawer and less adorned than on ‘Haihan’, which works to its benefit, but occasionally are coerced into power electronics territory, becoming like a terrifying transformer – growling, grinding, and sputtering in sullen, malignant squalor.

Taken together, the reedy bass clarinet makes Atsusaku more of a freaky free-jazz document, along the lines of last week’s Merzbow Monday entry, Strange City, where Merzbow remixed and re-interpreted vintage Sun Ra recordings. It’s like some old school ECM record on PCP and nightmares, which might be appropriate, as sometimes it seems like we’re living in the nightmare of the 1950s.

Atsusaku gets bonus points in the Merzbow ouevre thanks to a stunning cover from Machinefabriek‘s Rutger Zuyverveldt, who approximates Akita and Davis’ rumble and tumult using some class act op art techniques. Joe Smolders’ mixing and mastering does a fine job of separating the frequencies – the bass rumbles and grumbles without ever taking over, while the highs shriek and sputter without becoming ice picks in your ear. For those looking to master the art of mixing noise, take some notes on this one.