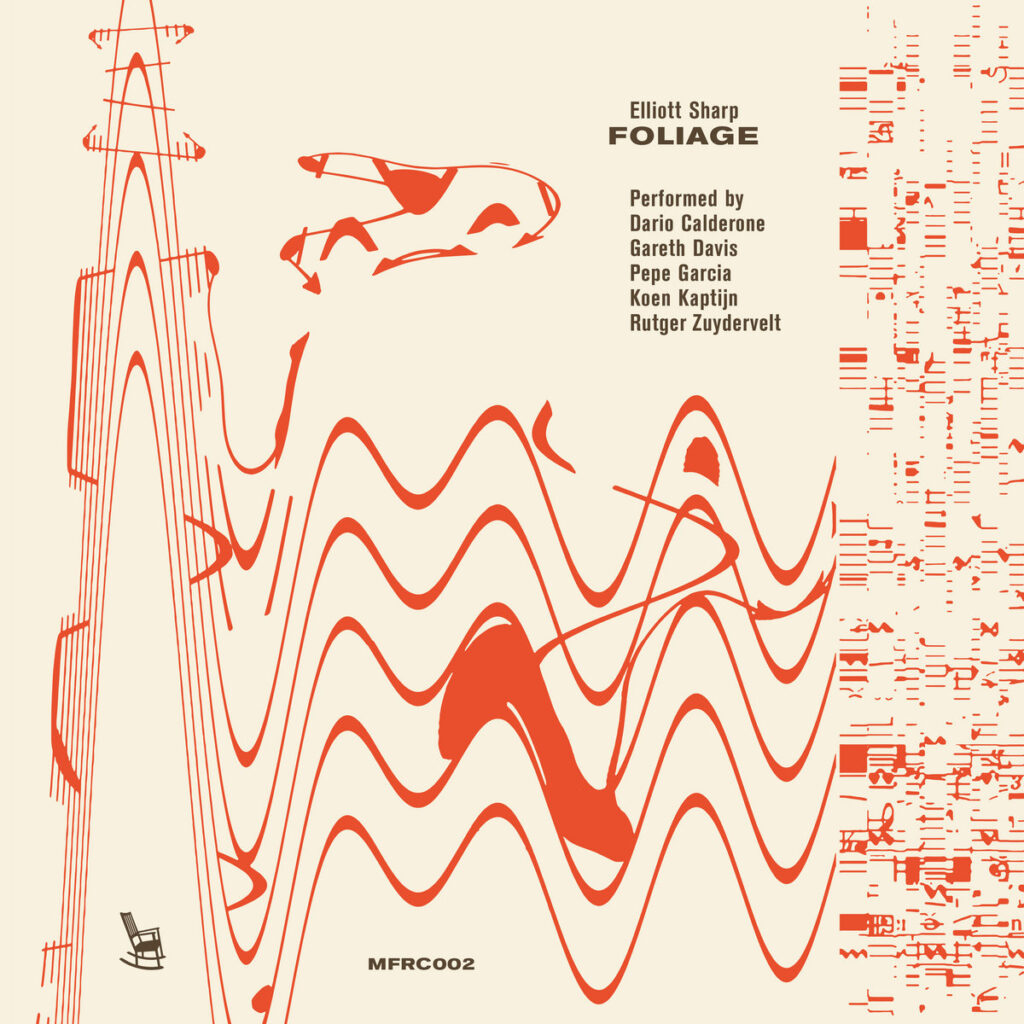 Record and mixed by Gareth Davis
Post-production by Rutger Zuydervelt

Featuring a series of 80 risograph prints, Foliage is, in Sharp’s words, “a graphic score open to interpretation and realization by any instrumentalist or ensemble of any size… [it] is a piece of retinal art as much as it is an instruction set for sound, form and function interlocked.” Graphic notation, which evolved during the post-1945 avant-garde, experimental music scene, falls outside the realm of traditional music notation; it is the representation of music through the use of visual symbols. Foliage exists at the intersection of musical composition, art installation and performance – Sharp’s score is brought to life by the distinct singular interpretation of each musician who performs it.

A central figure in the avant-garde and experimental music scene in New York City since the late 1970s, Sharp has worked intermittently with graphic notation since 1972 but began to immerse himself in the medium again a decade ago. Analogous to his use of audio editing software during live performances to modulate and distort sound, Sharp’s technique in creating Foliage was to use graphics editing software to process musical notion (that he himself composed) to distort, layer, invert, blur and ultimately explode traditionally written sheet music, in turn creating visual works of art.

Even following the subversive waves of 20-century avant-gardes, the classical score still remains the most widespread medium among composers for the transcription of their works. In short, traditional notation still prevails over the various forms of graphic notation: if one, in fact, is meant to reconstruct the composer’s thinking and the specific quality of his project as faithfully as possible, the other forces him to partially renounce his artistic paternity – with the exception of the visual matrix –, and thereby extends it or even completely entrusts it to its interpreters. Therefore, if this revolution is still slow to take place, this is due to the fact that it inevitably undermines the historical concept of ‘composer’, abolishes its implicit hierarchical superiority and opens the door to a total creative communion with the performer.

The dilemma doesn’t even seem to arise for a fervent and generous artist such as Elliott Sharp, engaged since the 70s in the commingling of music and visual arts, in order to develop new forms of free notation in light of the early pioneers of the ‘New York School’ (Cage, Feldman, Wolff) as well as Anthony Braxton and the enfant terrible John Zorn. Sharp’s inclusive attitude and curiosity have earned him collaborations with countless and prestigious American and European instrumentalists, amongst which were recently included the zeitkratzer ensemble, the JACK Quartet and the cellist Frances-Marie Uitti.

This second release in the ‘Contemporary Series’ of Dutch label Moving Furniture presents for the first time on a record the performance of a few extracts from “Foliage”, a graphic score of 80 Risograph prints resulting from a process of visual distortion of the pentagrams previously notated by Sharp : a “self-sabotage” via software that carries with it the glitches, deformations and chaotic accumulations of digital matter – now malleable like or more than clay –, thus offering itself to the most disparate readings on the musician’s part. And if, on the one hand, there’s considerable risk that the latter will bring into play certain stylistic automatisms related to his own individual path, on the other hand this means that, time after time, as if by osmosis, the score takes on the peculiar identity of the line-up involved, spontaneously averting any rigid classification.

The protagonist of this performance is an unprecedented “quartet + one”: in addition to the acoustic group of highly experienced experimenters Dario Calderone (double bass), Gareth Davis (bass clarinet), Pepe Garcia (percussion) and Koen Kaptijn (trombone), is added the contribution in post-production by Rutger Zuydervelt aka Machinefabriek: once again putting to good use his visionary skills as “director” and editor of sounds, he operates a subtle deconstruction and a schizoid reworking of the eight movements, to which he thus confers an even more provisional and sudden trait.

In the introductory climax Davis revels in the depths that are historically most familiar to him, with pensive phrasing whose tone is both lyrical and shaded, whereas Calderone resolutely plows through the subharmonic domain of Romanian spectralists Radulescu and Dumitrescu. These first coarse agitations, underlined by Zuydervelt’s dismemberments, gradually fade away in gliding towards the humid echoes and artificial resonances of the third movement, a pervasive soundscape which at times seems to evoke a cathedral of stalactites; we then get to the sly turning point of a cadenced underground procession (IV), dominated by the grotesque monologues without rhyme or reason of the winds, while the bass sneaks away with his free-jazz ups and downs in pizzicato, and Garcia’s frayed rhythms alternate outbursts of extroversion and closures. Increasingly sharp-edged intersections between the single voices in play then lead us through passages of imponderable abstraction, sometimes resembling the restless shadows of a sinister theater of the absurd (V, VII), other times aimed at crossing the border towards a chilling dark-ambient expressionism (VIII).

Even in a performance so focused and engaging to the ear, “Foliage” retains the elusive character and the dizzying unpredictability of the unachieved work – or rather, unachievable – it being finally, happily open to the innumerable natures that only an authentic interpretative plurality can grant it. What’s certain is that such a device, much more easily than others, will successfully resist the tyranny of time and cross any artistic climate with unaltered vigor.