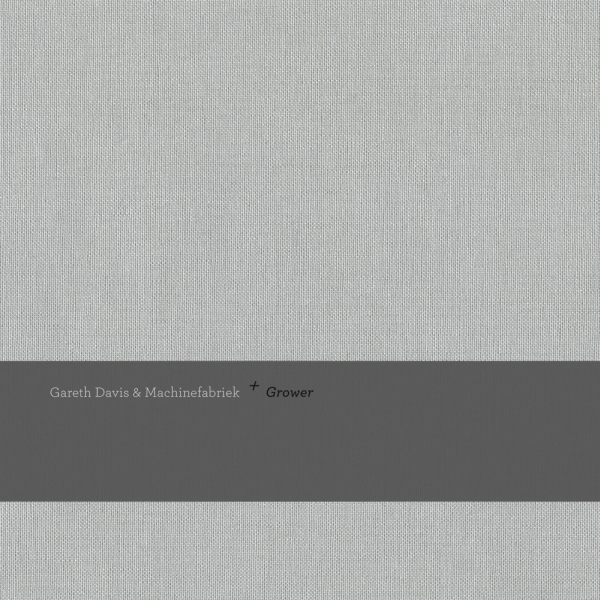 It can be breathtaking when musical chemistry pays off, and this sophomore full-length from British experimental clarinettist Gareth Davis and Dutch drone veteran Rutger Zuydervelt is an apt testament to this. The two musicians initially collaborated on just a handful of tracks, but an epic four-hour improvisation bore so much musical fruit that the two musicians were saddled with not one but two full-length records.

As the second of the two records (after the recently released ‘Drape’), ‘Grower’ has a lot of ground to cover, as both a companion piece and an extension to the debut album. Luckily it exhibits a welcome evolution of the sound, as the musicians seem to gel more and more competently throughout. The tone and character of Davis’s clarinet is clear from the outset, but apart from this easy signifier it can be difficult to hear exactly what each artist is doing. Zuydervelt’s subtle processes and tonal work is perfectly matched with Davis’s breathy tones and the sound is frozen in a cloud of dense ambience. The easiest comparison would be to Supersilent horn-smith Arve Henriksen, who’s intoxicating solo work has entranced so many, Davis’s animated clarinet playing, while in no way imitating Henriksen’s, shares similarities in both soul and the memorably eerie resulting sound.

‘Grower’ is an album which manages to straddle various disciplines; elements of jazz and post-classical music are bundled up in-between fragments of the disparate drone and avant garde scenes. That Rutger Zuydervelt and Gareth Davis managed to emerge with a coherent and deeply moving album is a reflection of their restraint and subtlety as musicians. ‘Grower’ might just be that, an album that develops and changes with every subsequent listen, so give it the time it deserves to mature.

Grower is the fourth collaborative release between British clarinetist Gareth Davis and Dutch experimental sound artist Rutger Zuydervelt as his Machinefabriek alter ego. Following last year’s Drape, which appeared on Home Normal, and culled from the same sessions, Grower is told in two parts or roughly equal length. Here, Zuydervelt uses guitars as main sound sources for the sombre introspective atmospherics he creates for Davis. There is an element of solemnity in his drone structures which echoes Davis’s contribution beautifully. The rich deep tones of the clarinet appear almost as a smoother, warmer reflection of the much colder and metallic guitar textures. These two pieces open in similar fashion, each slowly growing from a single, deep, note upon which Davis progressively places delicate motifs. Of the two, Part 1 is the more fluid piece, its overall flow growing almost imperceptibly throughout, the backdrop then slowly receding until the clarinet is left entirely alone.
By contrast, Part 2 appears much barer, especially in its first segment. Here, for two and a half minutes, the pair proceed as if they were so concerned not to make any noise that they had to make themselves barely noticeable. At times even, the boundary between processed guitar and clarinet is so blurred that it is actually difficult to identify the sound sources and differentiate them for sure. It takes another six to seven minutes for the backdrop to come into focus, but it remains fairly monolithic for some time as Davis pushes into distortion. In its later part though, this second track is much more angular and cutting than any moment on Part 1, the gentle dialogue which had settled in the earlier section of the track turning into a more heated debate.

So the story goes that Rutger Zuydervelt and Gareth Davis met once for 15 seconds and out of that enough music for four albums was spawned. That’s an exaggerated version of events; nonetheless, by now this pairing is the stuff of myths. ‘Grower’ is the result of the same session that brought us last year’s ‘Drape’ release on Home Normal from this pair. Unsurprisingly, ‘Grower’ is surely to be as treasured by all that enjoyed the first round of music.
With ‘Grower’ what we get are two songs clocking in at over 15 minutes apiece. The thing that has made this duo a delight to hear is how well they feed off one another, especially considering the brevity of the sessions that led to this release. These are songs that take their time and are delicately nuanced but also surprising: the stillness is just an illusion as things are always transforming, elements drift in and out of focus, and what seem to be incidental moments actually become motifs within the pieces. Machinefabriek proves himself again and again to be a great collaborator always serving to counterpart the very best attributes of those he works with.

‘Grower Part 1’ begins with a long stretch of Rutger’s droning guitars setting the tone. But once that clarinet enters there is a whole new element added to the setting. When Davis enters there is a sense of foreboding and mystery that becomes clear, almost as if Davis gives the evocative aspects of

Machinefabrieks’s works a sort of pinpoint accuracy. Gareth Davis does a lot with a little once again as he seems to be able to reference various world influences in three notes or less a la Demdike Stare. It’s quite unbelievable how many corners of the world this music is able to reference in its 33-minute span.
‘Grower part 2’ is the far more subdued piece at the outset. Davis comes in early on this one and Machinefabriek tends to take a more reserved position in the background. This time the relationship is reversed: it is Rutger who acts to give Davis’s work a sort of platform to build off of. But as it evolves, the piece turns noisier and darker than it’s predecessor. The final minutes seem like some nightmare of dissonance that might serve as part of the score to a Dario Argento film circa 2032.

The two songs that comprise ‘Grower’ are perfectly configured to create a narrative, just as the four compositions that made ‘Drape’ were. It seems odd to label improvised works as ‘perfectly configured’, but really this is a very focused release. Sure, such decisions are made after the fact, but still; we as listeners reap the rewards.

‘Grower’ is an album that often takes its time. These two artists hear each other and hear each other well, never missing a step, never getting ahead of one another. The only way these sorts of musical payoffs exist is when you have two musicians working with a sort of chemistry that is either organic or, well, not-at-all. Needless to say, these are two artists that balance/challenge/coerce the best from each other.

Last year brought us ‘Drape’ from the collaborative minds of British clarinet virtuoso Gareth Davis and Dutch experimentalist Rutger Zuydervelt. ‘Grower’ is based on material culled from the same sessions, but manages to hold up as a very different beast to its predecessor. What sets these two musicians apart from their contemporaries is a patience and subtlety often missing in drone music. That might seem like a funny thing to say about material which would most often be called out as dull by a passer by, but too much of it is plagued by unnecessary production smarts and incessant hyperactivity. Not so here, where Davis and Zuydervelt drag us through two expertly measured long-form pieces which allow the time we need to sink in to the music and experience it from the inside, out. Davis’s clarinet is the centrepoint of the record, with its breathy tones providing the perfect foil for Zuydervelt’s syrupy tones and treatments. While the two musicians might not be dropping anything particularly new onto the table, they have managed to fashion a record free of missteps, and one that you can lose yourself in from beginning to end.

You know where you are with Sonic Pieces. It’s a label which sporadically releases things in high quality packaging but when they do eventually release something you know it’s gonna be ace. ‘Grower’ is packaged in a hardback textured book sleeve and is hand numbed of 336 copies. It’s absolutely stunning as well. I wasn’t mad keen on Drape when I heard it but this is a lot more moving and it certainly is a grower! Davis’ bass clarinet perfectly compliments Machinefabriek’s guitar loops and editing. It’s got a very cinematic feel with it sounding like a soundtrack to some tense dark horror film. The ambience they’ve created is breathtaking here with it being a genuinely enthralling listen from start to end. Not something I thought I’d ever say about a collaboration between these 2 guys as drone music isn’t really that enthralling as a rule, but they’ve nailed it with this fucker. So if you’re a post-jazzer who likes drone then you’ll wet your pants with this superb collaboration. Listening to it just taks you to another place… It’s totally special when a record does that so it’s a delight to listen to this again. Gonna take a copy home and listen to it again tonight! They’re gonna go quick ‘n all so don’t hang about!