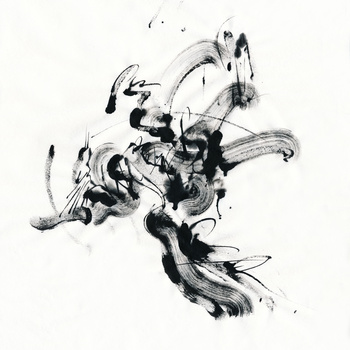 The Whalers Collective is a sort of supergroup for the world of minimal electronic music. The Collective features Gareth Davis, Ian Hawgood, Félicia Atkinson, Ryo Nakata and Rie Mitsutake. Now, I use this analogy because what makes this album work is that it is the antithesis of what normally defines a supergroup. Normally, the supergroup is too often about gathering a group of folks who have somehow excelled and then letting them compete for space in an attempt to outdo each other. The Whalers Collective is about a group of artists doing their best to create space and carve out room for one another.

And creating space does seem to be a key goal across the album’s six compositions. Gareth Davis’ contribution on clarinet stands out because of the sheer volume of the clarinet but even his work seems designed to get in and out as quickly as possible, often coming at the listener in fits and spurts but never for any extended period of time. In other words, there is a sort of modesty on display here. And the ebb and flow of the compositions always blooms in such a way that when the artists do build something they build as a unit. Even the use of human voice is as undramatic as can be, with voice always creeping its way into the mix rather than boldly proclaiming its presence.

Overall, the music here pulls off a strange balance between breathless and breath-y. Notes come rapidly but then are left to linger. And indeed most of the music feels like it exists as vapour trails – nothing is solid.

The album’s fifth piece takes on a more rushed pace, providing the album’s most chaotic moment. The palette seems to rely on a mix of spastic clarinet, guitar feedback and percussive moments that seem to never settle into anything overtly rhythmic. The clarinet takes centre stage acting as the guiding force/central character as the narrative drives towards its end. It’s like layer upon layer of fog rolling in and folding on top of each other – it’s still not solid but it does seem more defined. It’s both chaotic and cathartic. And the final piece seems like a coda – the comedown after the chaos – those layers of fog clearing way.

“Nantucket” is an unflashy record. But that seems to be the point. It takes its time and never feels the need to impose any grand strokes for the sake of making grand strokes. It’s an album that thrives on capturing moments of synergy between the musicians. It’s an interesting record when placed into the context of any of these artists solo careers: rather than simply doing what they often do, they all seemed to strive to leave their comfort zone and carve out some new voice for themselves. It’s a commendable record in that regard and a good listen for these fall days.