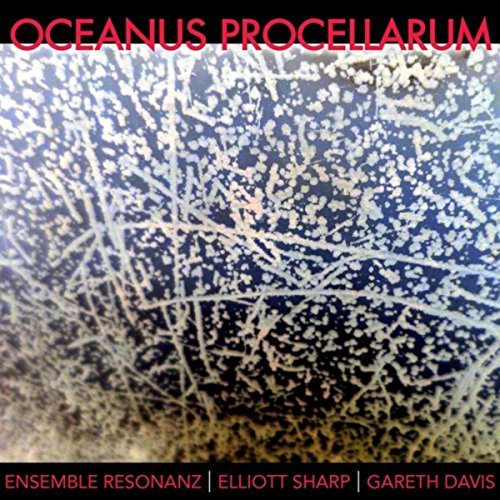 Elliott Sharp’s “Oceanus Procellarum” is a work filled with propulsive development that is rich in rhythmic and timbral complexity. “Oceanus Procellarum” was recorded live at its UK premiere during the 2016 Huddersfield Festival. This performance was beautifully recorded and has a sound that is much larger than the chamber ensemble of twelve strings plus the two soloists. “Oceanus Procellarum” which translates to Ocean of Storms is a thirty-eight minute through composed piece in five sections with each section consisting of multiple episodes. Sharp constructed the piece to be a kind of intersection between two moving fronts somewhat like a concerto in that it pits the two soloists – Elliott Sharp on electro-acoustic guitar and Gareth Davis on bass clarinet against the strings of the Ensemble Resonanz. The piece creates a sound world where textures build, form and transform in a kind of attraction and repulsion as the two moving fronts move into and out from each other. The composition has a raw intensity with many dramatic shifts where events can suddenly move from very intense large sound bodies to moments of reflection only to suddenly be challenged by the arrival of another moving front.

Since improvisation is at the heart of Elliott Sharp’s work it is likely that some elements of improvisation or performer choice are part of this score and this enables the soloists – Sharp and Davis, who are outstanding, to create an atmosphere of spontaneity throughout the performance. The strings are called upon to use many extended techniques including “alternate bows” constructed from various metal springs and wooden sticks. Despite what must be a challenging score to perform, the Ensemble Resonanz really brings this music to life. The timbral range produced by the entire ensemble and soloists is stunning. They effortlessly move from chaotic clouds to throbbing masses of growing clusters to ethereal almost ambient reflections to sparkling and brassy counterpoint to intense primal rhythmic unisons and eventually they end in a bed of very soft bowed white noise.

“Oceanus Procellarum” is an exciting listen. Old hands will really enjoy it and newcomers will find it a great place to start as it is absolutely one of Elliott Sharp’s best chamber works. Highly Recommended!