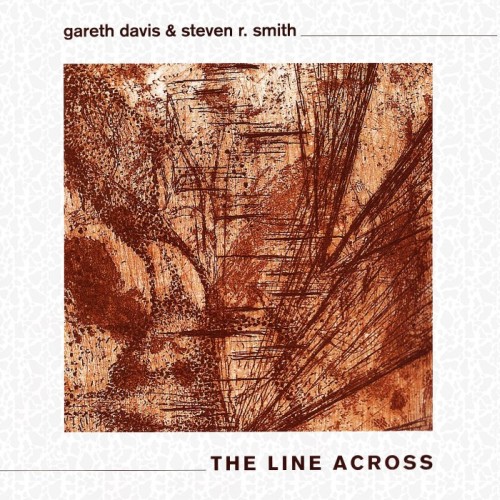 Clarinettist Gareth Davis and guitarist Steven R Smith (Hala Strana, Mirza, Thuja) have already collaborated to stunning effect back on 2009’s “Westering” released on the Important label. This alt.vinyl release sees them gain another notch in history’s belt. The at-first-glance bizarre pairing of these two instruments might conjure up images of anchorless skronk and scratch, however “The Line Across” is anything but. With each side of the vinyl containing just the one ambitious piece, this duo creates seas of organic drone that live and breathe.

Unspooling like wisps of smoke, the tones of “Other Forms of Consecrated Life” simultaneously conjure exotica and melancholy. What Davis and Smith manage to pull off here is the sound of flickering reflections in canal tunnels, something beyond drone and soundscaping; 3/4 cloud cover sporadically parting to reveal abyssic drops within it. It is not all intangible drift though; raw guitar sequences (even rhythm parts) appear in the sound as clarinet echoes and violin/fiddle tensions make textures from foreboding trails of drones. If a piece of shorthand could be applied to Steven R Smith’s playing here, then picture a Colour Haze or Earth trading instrumental punches with Derek Bailey through a Styrofoam cup phone.

On the flipside is “The Natural History of Devastation”, a piece that falls somewhere on the fields far beyond descriptions and sounds of grace and mourning. There are unconscious nods to a GYBE! sound here, layered stately string sounds and the chiaroscuro of feedback and waves of black moving across the vinyl. This track is a slow lull of strangled clarion call, Orbison’s cold fingers on the guitar and banks of fog leaving only loss in the sound’s wake. Things might not at first listen appear like they’re going to be ok in the morning, but familiarity with “The Line Across” shows that they might just end up close to perfect after all.