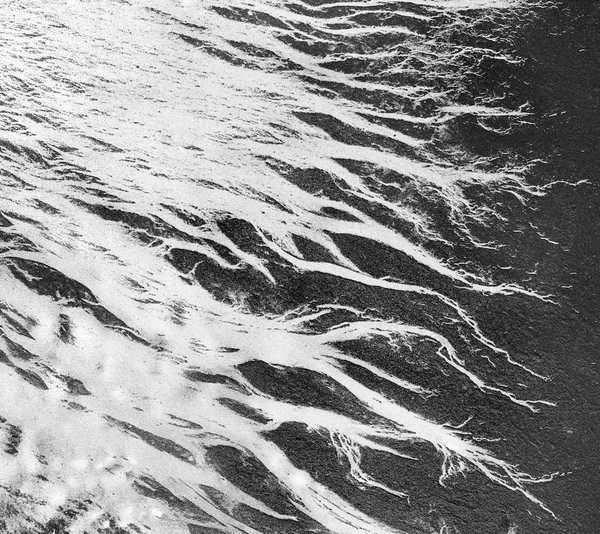 “Orchestral.” The word’s an adjective, certainly, an unambiguous one. It depicts amassed instruments working in synchrony according to a fixed document prepared in advance.

For that is the sound of Michel Banabila’s Uprooted, this album of beautiful, striated, patient music — patient on the surface, deep with turmoil underfoot. When bass clarinet and harmonium rise above a misty string section halfway through “Breathe,” that’s orchestral. When woodwinds trill and pulse against piano on “Dragonfly,” that’s orchestral.

Over the years, Banabila has made his share of experimental ambient, wherein future roots cultures are foreseen through a low-tech looking glass. On Uprooted, the tech is transparent. The album has touches of Fourth World, most notably on “Collector” and “Breathe,” but Uprooted is orchestral, full stop.

It’s also an album entirely forged of material sampled by Banabila from improvisations by invited musicians. Those samples were then constructed into a whole by Banabila, layered sinuously rather than triggered on a rhythmic grid. The fixed orchestral document here is the recording, and it marks the close of the composer’s efforts, not the start of the performers’.

On his latest album, Michel Banabila “uproots” concepts of the orchestra. Marc Weidenbaum’s liner notes ask “What if ‘orchestral’ referred to what we heard, not how it was recorded?” These tracks are indeed orchestral, but they have been plucked from their original soil and replanted.

Banabila invited a number of friends to participate in the recording process, among them Stijn Hüwels (who seems to appear on every album this season), Gareth Davis and Oene van Geel. He then recorded the guest improvisations on instruments such as the bass clarinet, viola and cello, then took the raw material back to his greenhouse, where he extracted the seeds. After this, he began to water them with electronics, pruning them as they developed, shaping them into the healthy plants they are today. To the ear, these compositions seem as if they could be live; and they certainly don’t seem like improvisations. While their forms are fixed, it’s conceivable that a live orchestra could offer stirring renditions.

We’re used to hearing Banabila as a more restrained performer, floating gently in the ambient arena. The meditative “Collector” is the best bridge to the larger body of Banabila’s work. But he seems to be energized by this new compositional approach. “Breaking Point” is embedded in light electronic soil, atop which the bass clarinet plays. Correction ~ the sample plays. It’s easy to get distracted and forget, a testament to the seamlessness of Banabila’s splices. That is, until the burst of sound at its center ~ like a plant breaking through the earth. After this, the track reaches a “new normal” of stasis.

When the guitar is added to the peaceful “Breathe,” the tone turns temporarily to jazz. But the bulk of the album falls into the category it claims. At certain times, Banabila approaches a timbre of joy, most notably on lead track “Dragonfly.” This piece swiftly develops a head-nodding tempo, only temporarily restrained by plaintive piano. The track teases the listener like the arrival of warmth, approaching and retreating, imitating mild days followed by frost, steadily moving toward the season of the dragonfly. Once the strings enter in earnest, a minute before the end, the song sings of spring. The composer is having fun, cherry-picking the happiest snippets to loop and layer. It’s easy to imagine Banabila as this new creation, emerging from the larva and testing his wings under the encouraging April sun.

Michel Banabila‘s 36 year career (his first release was Marilli, in 1983) has known many surprises. Many unexpected turns and genre-crossovers made him hard to pinpoint in one specific area, but also became a trademark of his versatility.
I’m not going to repeat too many details here: you can just search his name here on this blog to see quite a few of his releases recommended.

In recent years, Banabila moved toward more abstract experimental electronics. He has collaborated with many artists with whom he co-created the music, or who delivered fragments and sample parts that Banabila used to further create his music with.
When collaborating with violinist Oene van Geel in 2014 (for Music For Viola And Electronics), a seed was planted: the desire to create arrangements for a more acoustic ensemble.

This album is the (first?) culmination of that wish – the music is performed by a remarkable ‘ensemble’ of guest musicians: Peter Hollo (cello), Alex Haas (synth, electronics), Gareth Davis (bass clarinet), Oene van Geel (viola, stroh violin), Stijn Hüwels (guitar, electronics) and Gulli Gudmundsson (electric bass, double bass and e-bow). Of course, Banabila himself also contributes to this (midi instruments, sampling and electronics) – but his main role is the creator/director of this ‘ensemble music’ he wanted to make for many years.

And so, Uprooted marks yet another important direction in Michel Banabila‘s already impressive catalogue.

I don’t know if I would have recognised this as a Banabila project if this had been presented anonymously and without context. Mainly because the overall sound is so very different from his earlier work.
But gradually, I started to recognise some of his musical trademarks. Which is also true for the creative process: the compositions a result of extensively manipulating the sampled material.
It’s authentic ‘Banabila’ music but with a different instrumentation that sounds like they are, or could be, performed live. Which, according to Michel is not exactly the case:
“From these five tracks, only the first (Dragonfly) can actually be performed live; the others consist of so many edits and treatments that they are more like a ‘sketch’, a sketch of a possible new future for me, an atmosphere or genre where acoustic instruments and electronics melt together.”

I’m not entirely sure, but I guess the ‘ensemble’ is a virtual collective who never met each other to play together during the creation of this album. The middle part of Collector, for example, “feels like Oene, Gareth and Peter are reacting to each other but nothing was played live or even on the same track.”
Knowing this, it is even more amazing to hear how ‘organic’ the compositions sound. I can still imagine them being performed live by this ensemble collective (and I really hope that we’ll live to see this happen sometimes in the future)!

The music itself is hard to categorize: there are elements of improvisation, parts that sound ‘composed’, ‘post-classical’, with many elements referring to ‘ambient’ soundscapes.
But ‘uncategorizable’ is how we have come to know and appreciate Banabila‘s work.

In the liner notes for this album, Marc Weidenbaum uses the word ‘orchestral’ and I think that word simply covers this exciting new direction in Banabila’s musical path – a promising venture into new territories!